Why DevOps and SRE Are the Future of Software Development

Consumer demand for high-quality software is growing by the day. As a result, providers are constantly looking for innovative ways to increase product reliability, efficiency, and deployment speed.

DevOps and Site Reliability Engineering (SRE) are two modern practices in software development that have gained considerable traction over the past couple of decades, and with good reason. Among other things, they improve collaboration between development and operations teams, help ensure continuous delivery, and result in a faster time to market.

However, to make the most of these practices and fully appreciate why DevOps and SRE have become the norm in modern app development, it is important to understand their similarities, differences, key principles, and respective pros and cons. That will help you find the best solution for your company and business goals.

The term “DevOps” was coined in 2008 by Patrick Debois and Andrew Shafer. In just a few years, it went from a niche concept to a methodology that is now espoused by a majority of software development companies.

DevOps is a software development model that brings together the traditionally separate development and operations teams. By bridging the gap between the two departments, this approach helps improve communication and collaboration. That, in turn, helps achieve continuous deployment and faster time to market.

To enable better team integration and a more frequent release rate, DevOps relies heavily on end-to-end automation, managing the whole infrastructure as code, as well as a variety of lean or agile practices.

What Does a DevOps Engineer Do?

Traditionally, operations and development teams had individual goals and different responsibilities. The primary focus of developers was building and introducing new features, whereas operations teams were tasked with preserving the stability of the software. That often resulted in poor communication, inefficient collaboration, and slower product-to-market time.

In contrast, the DevOps job description encompasses tasks, tools, and methodologies across the entire software development lifecycle — from coding, deployment, and updates to ongoing application management and maintenance. The main goals are to integrate a previously siloed team, automate the bulk of the operations, and enable a faster pace of future releases.

That means DevOps engineers need to adopt a more holistic approach to development and deployment, taking on a broader range of responsibilities. Depending on the circumstances, they may need to have technical skills such as:

What Is Site Reliability Engineering?

The concept of Site Reliability Engineering first came about back in 2003. It was introduced by Ben Treynor, the founder of Google’s SRE team. He had noticed that no existing architectural method at the time could meet the unique requirements of developing large-scale apps.

Site Reliability Engineering or SRE is an approach to software development that puts developers in control of operations. The primary focus is to ensure system reliability and automate as many tasks as possible.

The environment is segmented into the most basic components of the tech stack, which are then rolled out with best practices integrated from the ground up, including at the hardware level. That makes this model particularly well suited to building highly reliable, ultra-scalable, and large-scale systems or applications.

What Does an SRE Engineer Do?

The simplest way to describe Site Reliability Engineering is as handling IT operations from a software developer perspective. SRE engineers take over tasks traditionally done by operations staff — often manually — and use software and code to solve problems, manage production, and automate processes.

Automation, in particular, is key to SRE. It enables development teams to build large, scalable systems quickly and easily by allowing them to focus on creating new features instead of time-consuming manual tasks.

In that sense, a site reliability engineer’s job is a delicate balancing act. On the one hand, they need to foster automation, scalability, and the continuous release of new features. On the other hand, they have to ensure the products are reliable and sustainable for the end user. An important aspect of SRE is monitoring and measuring software quality levels to act in consequence. Because of that, SRE engineers are very familiar with concepts like SLIs, SLOs, and SLAs that are closely related to business operations and help a lot to evaluate the software quality.

DevOps vs. SRE: Similarities and Differences

DevOps and SRE are not rival models but rather two sides of the same coin.

Both aim to enable Continuous Integration/Continuous Delivery (CI/CD). As its name suggests, it allows teams to easily and continuously integrate, deliver, and deploy new releases by introducing automation and ongoing monitoring throughout the product lifecycle.

Likewise, both DevOps and SRE seek to close the gap between development and operations, building integrated and collaborative teams with the same end goals:

If you think of DevOps like an interface in a programming language, class SRE implements DevOps. While the SRE program did not explicitly set out to satisfy the DevOps interface, both disciplines independently arrived at a similar set of conclusions. However, just like in programming, classes often include more behavior than just what their interface defines, or they might implement multiple interfaces. SRE includes additional practices and recommendations that are not necessarily part of the DevOps interface.

Like we said above, DevOps and SRE are not two competing methods for software development and operations, but rather close friends designed to break down organizational barriers to deliver better software faster. If you prefer books, check out How SRE relates to DevOps (Betsy Beyer, Niall Richard Murphy, Liz Fong-Jones) for a more thorough explanation. 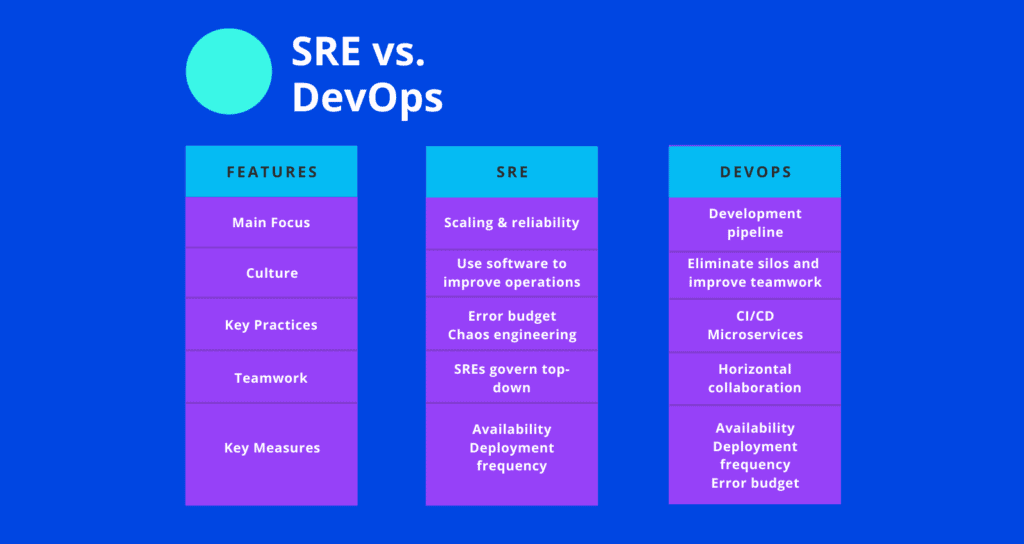 Advantages and Disadvantages of DevOps and SRE

Both DevOps and SRE have their pros and cons. For instance, you will have to factor in the operating costs of maintaining redundant systems and building additional infrastructure for an SRE or a DevOps pipeline. That said, the potential savings from sticking to a more conventional software delivery process are likely to be offset against the longer downtimes and resource-draining manual processes.

At the end of the day, whether you use DevOps or SRE, there will be some give and take. Overall, however, the benefits far outweigh the downsides, and you should end up with higher-quality and more efficient, reliable, and scalable infrastructure.

DevOps and SRE are only one part of a much larger cultural shift in modern web app development. DevOps and SRE can be as important as choosing the right architecture (i.e. microservices), having proper monitoring (i.e. ELK) defining your SDLC and using the right tooling (i.e. Azure DevOps).

How Modern App Development Can Help Your Business Grow

Want to learn how SRE and DevOps architecture, cloud platforms, and agile programming principles can take your business to the next level?